A producer-led watershed group that shares and learns from other farmers to be profitable, protect and increase soil functions, and improve water quality in the watershed. We strive to teach other local farmers how to make conservation systems work on their farms to be part of the solution for cleaner water and sustainable farms.

Farmers of the Sugar River

The Department of Agriculture, Trade and Consumer Protection (DATCP) awarded a Producer Led Watershed Protection Grant to this group of farmers.  They have been busy teaching other farmers and the public about no till, cover crops and other ways to minimize soil erosion. The structure of the group is that a board of 7 farmers plan events for farmers to learn from.  There are no memberships or dues. Farmers are welcome to join one or all events.  But in order to participate in conservation practice incentive payments, farms must be located within the watershed.

There are two roundtable meetings planned- the first will be Feb. 2nd at 6pm at the Pink Heifer in Monticello and the second will be on Feb 28th at 1pm at Bridges in Brodhead.  These meetings are meant for farmers to talk to each other about how the past year went, things they are thinking about next year and to get ideas or input from other farmers.  The annual meeting is planned for Feb. 21 at the Albany Lions Club in Albany starting at 10am. Click here for the annual meeting agenda.  There will be farmer panels discussing no-till and alternative manure handling strategies.  Steve Apfelbaum will explain the awesome role farmers have in carbon sequestering.  We’ll discuss findings of the biomass sampling project conducted last fall and hear from the DNR on the health of the Sugar River.  We are also planning to have a shop talk on March 21 at Jerry Daniels’ shop at N1495 County OK, from 3-7pm to discuss herbicide groups, herbicide programs that work with different plantings of cover crops, and termination of covers (including a roller crimper).

The group was awarded a $22,000 grant from DATCP for 2022. A roundtable chat was held at Toeffler’s in New Glarus on Jan. 27 with 14 people attending.  The annual meeting was Feb 15th at the Albany Lions Club. Keith Berns and Rodrigo Werle were our guest speakers. 85 people attended the meeting. Click to link to the event that was posted on facebook.  March 2nd, 7 people attended a meeting to talk about research and demonstrations that they were considering on their farm this year.  Later in the spring, three farmers were interviewed about no tilling and their planter adjustments by Tonya Gratz and Dan Smith (see above clips).  A round robin field day was held on June 14 at 4 farms for 20 people looking at planting into covers and interseeding covers into corn. On August 17, Gov. Evers and DNR Sec. Cole made a quick visit to the watershed and spoke to a couple of members. We hosted two pasture walks pop-up style on September 9th and created a summary page for each hosting farmer: Bryce & Jen Reimer (has 12 farmers come) and Bert & Trish Paris (had 8 farmers show up).  Corn silage was harvested so we had a pop up field day to see how the interseeding turned out on September 14 at Wengers with 12 people attending. To cap off the year, 20 people toured two important local businesses- Honey Creek Feed Mill and Badger State Ethanol on November 29th. Incentive payments were paid to 18 farmers in the sum of $14,334.25 for planting cover crops, no-tilling (most were planting green), constructing a waterway and grazing covers.  A little more than $4,000 was spent on putting on meetings, workshops and attending conferences.  In fall, we collected and sent in 16 biomass & matching soil samples to be analyzed for nutrient content.  This data will be presented at the 2023 annual meeting in February.

DATCP awarded the group a grant of $14,700 for 2021.  The group paid for 5 people to “attend” the virtual No Till Conference and also paid a teacher’s tuition to learn from Understanding Ag’s Regen Ag 101 class.  There was an in person & virtual meeting on Jan. 7 that a panel of 4 farmers talked about their experiences planting green and answered questions for 24 attendees.  At least 24 people joined virtually to Rick Clark and Erin Silva speaking at the Dodge County Soil Health Expo on Feb 10.  There was a virtual meeting on Feb 26th for a chance to discuss soil health test results from prior sampling.  On April 6 we had a cover crop field day at the Coplien Farm just north of  Juda on County S that 28 people attended.  On May 26 we had a pop up field day showcasing planting green and roller crimping. On July 13 there was a soil structure field day at Nick Faessler’s farm that 33 people witnessed a rainfall simulator and soil pit.  On October 27th we held a follow up to the pop up field day,  harvesting corn and drilling another cover crop.  We offered incentive payments again this year for cover crops, planting green or roller crimping, soil health testing and some constructed conservation practices.  $21,008.35 was paid to 21 farmers for implementing conservation practices.

A DATCP grant for $35,000 was awarded for the year to support meetings, education, incentive payments and administration of the grant.  A roundtable discussion for 10 people was held Jan 22 at TnD’s in Monticello.  7 of us carpooled to the Cover Crop Conference in Stevens Point February 20.  The annual meeting was held February 26 at the Albany Lion Club with Adam Lasch, Aaron Augustian, and Frank Lessiter as our speakers. We had 58 people in attendance.  Shop Talk was cancelled because of  Covid19. We held two pop up field days- one on June 22 about soil health testing (had 12 people come between two sites-Dennis Miller & Alvin Francis) and the other on July 9 on cover crops (7 farmers at Jerry Daniels’ shop). The summer field day/ tour was held at Robert Zurfluh’s farm on Aug 28. We had 15 farmers attend. $30,997.42 as incentive payments were paid to 39 farmers for fall cover crops, planting green (no-tilling), roller crimping, soil health testing and other constructed conservation practices.

$25,000 was the DATCP grant award for this year.  The annual meeting was held March 5th at the Albany Lions Club with speakers Jim Leverich and Ted Bay.  It was centered around economics of no till and cover crops.  60 attendees enjoyed the information that was presented.  This year’s shop talk was held at Helena, north of Monroe, on March 26 and discussion was about sprayers and herbicides.  There was a Summer Field Day August 7 at Truttmann Dairy LLC. The group applied for $25,000 from DATCP in 2019 and has been awarded it.  $7,709.25 was  awarded to producers in the watershed that tried new things on their farm- no till planting a crop they haven’t before and planting cover crops.  The fall was wet and very challenging to get cover crops planted, so we carried $13,843.74 into 2020 to use for incentive payments to farmers.

The group was able to have a logo created to help create a “brand” and have better group recognition.  It features a meandering river of blue, mimicking the Sugar River, with green buffers on both sides of the blue.  Shirts and signs were made to promote the logo and name recognition with the group. Three events were planned and people showed up!  There were over 70 people at the first annual meeting on February 20 at the Albany Lions Club.  Jamie Patton was the keynote speaker and put that days’ downpour of over 2 inches into perspective as to what was happening to the soil when left unprotected.

The DNR gave an update of the condition of the Sugar River and it sounds like it’s doing well.  Two farmers, John Koepke and Lee Kinnard, shared their experiences with no till and cover crops in their area of the state.  Shop Talk was held on March 12 at Dan Roe’s shop, south of Monticello.  31 people came wanting to learn more about drills and planters.  At the Summer Field Day on August 21, hosted by Jerry & Barb Daniels, 60 attendees came to see a soil pit in a standing corn field and to see how different land managements held up in the rainfall simulator.

Farmers of the Sugar River received a $16,500 grant from Department of Agriculture, Trade and Consumer Protection for 2018, and spent about 75% of it.  The remaining leftover money will carry over into 2019. 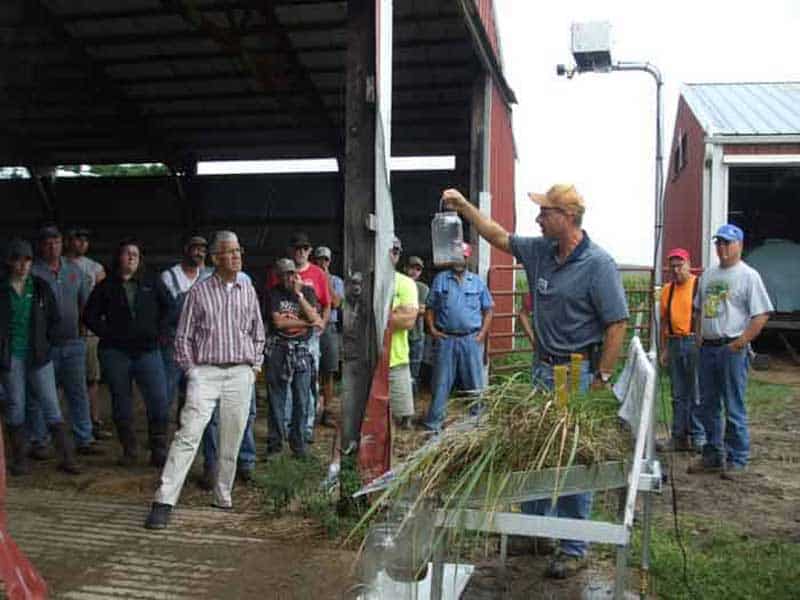 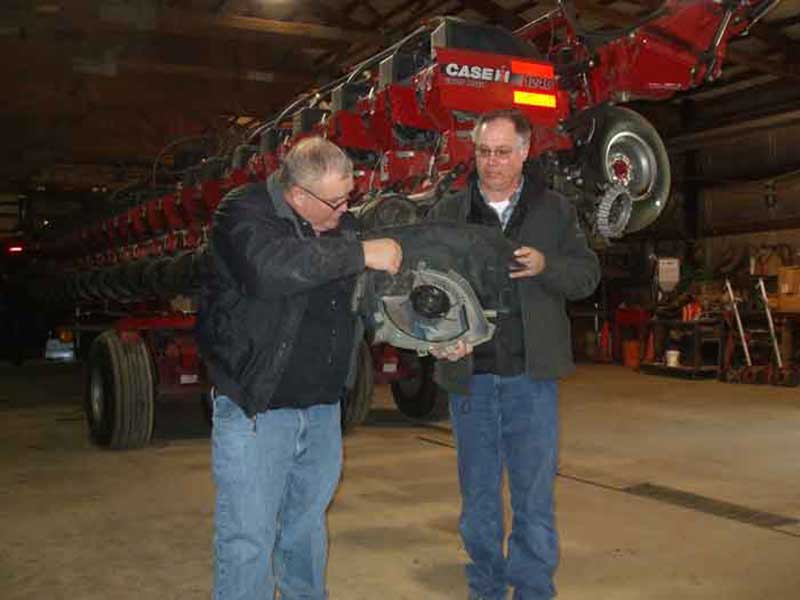 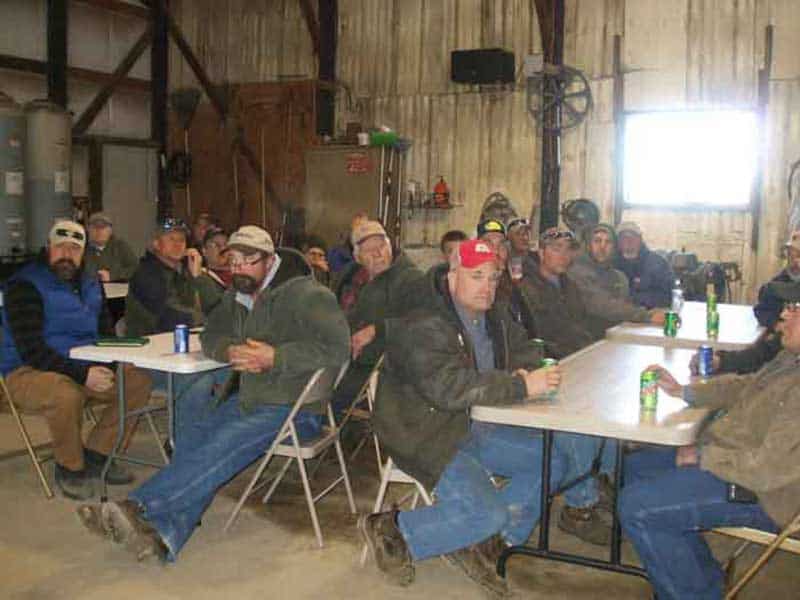 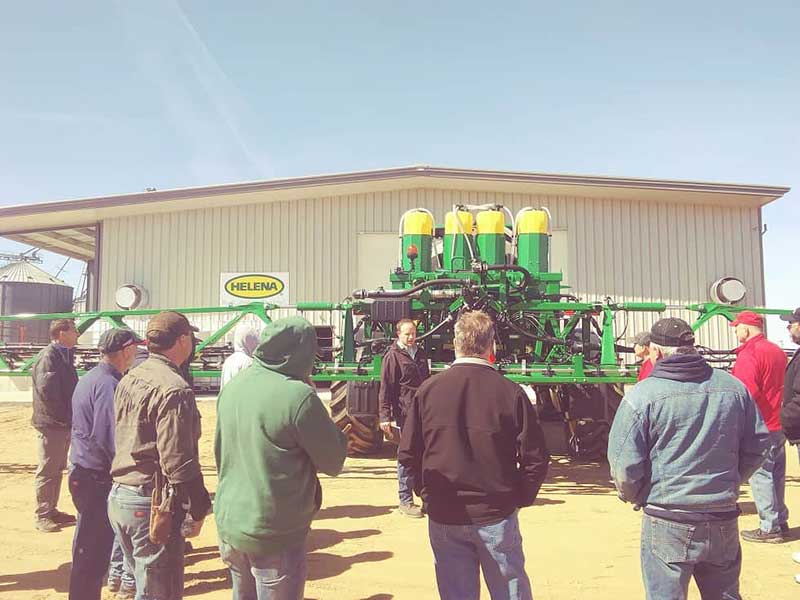 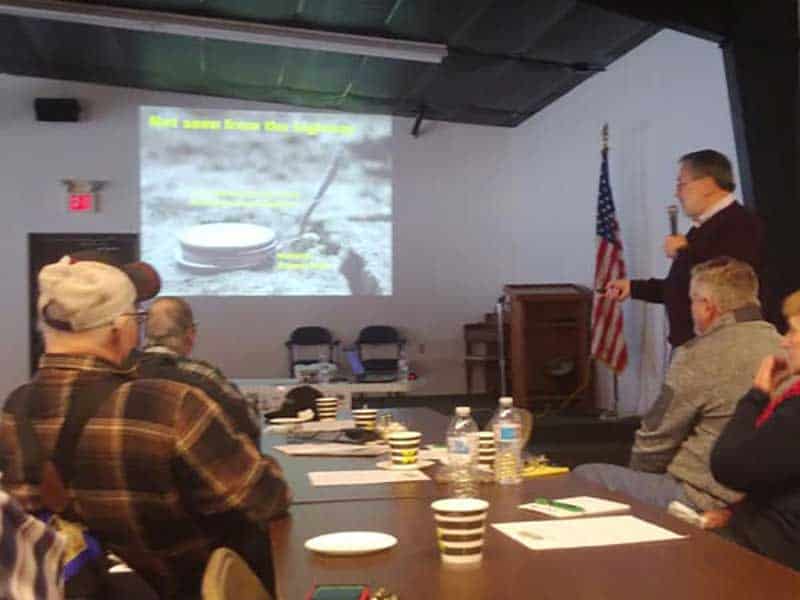 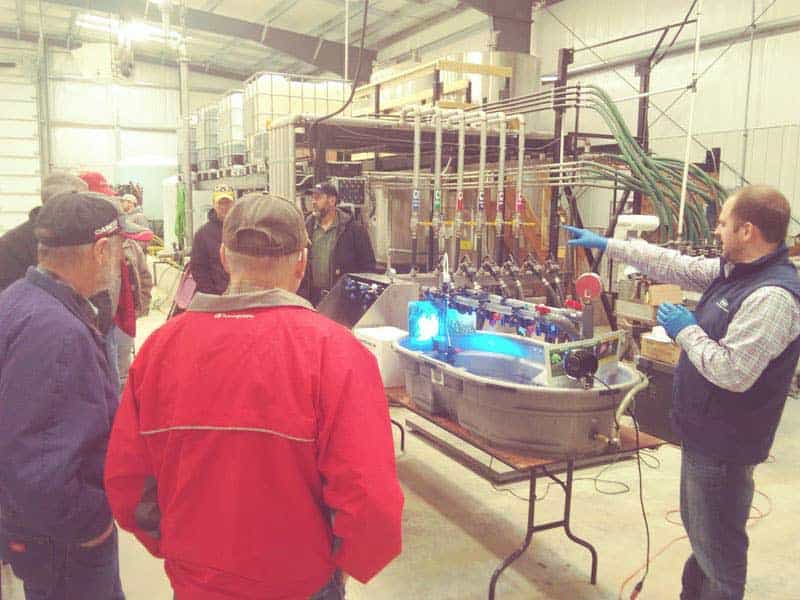 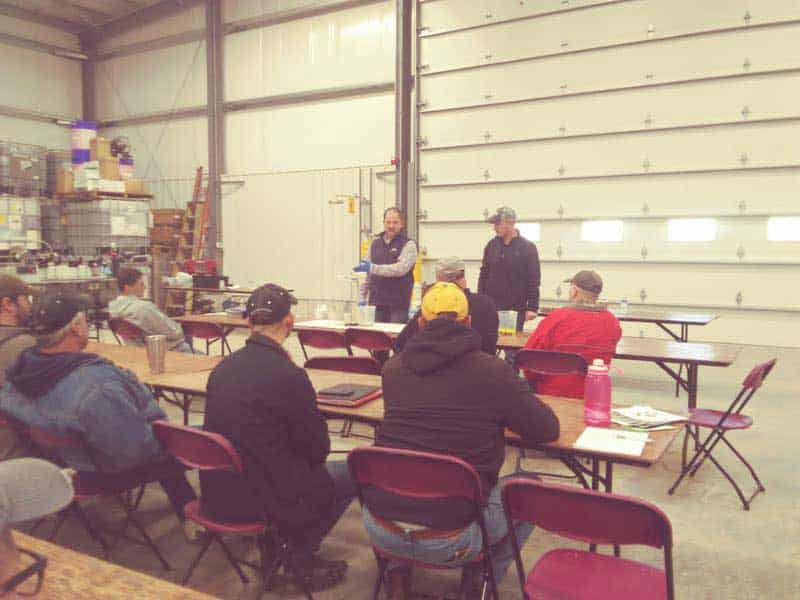 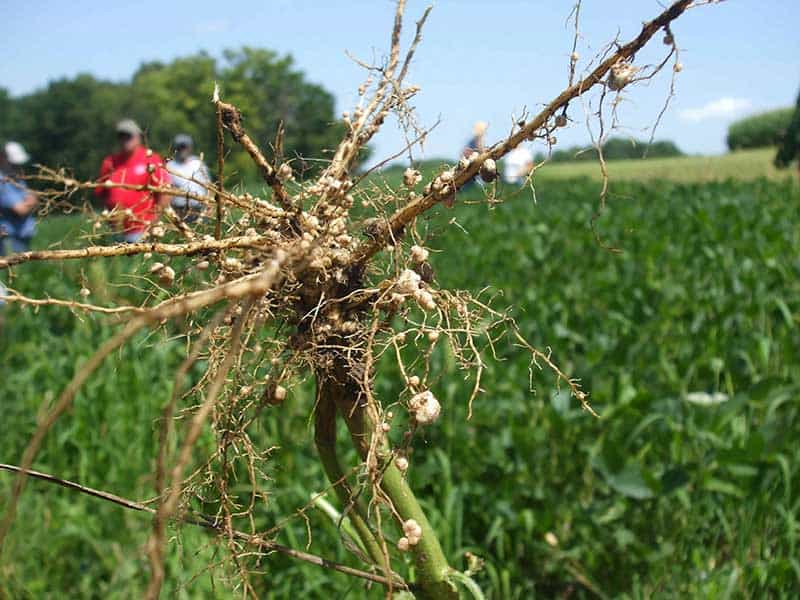 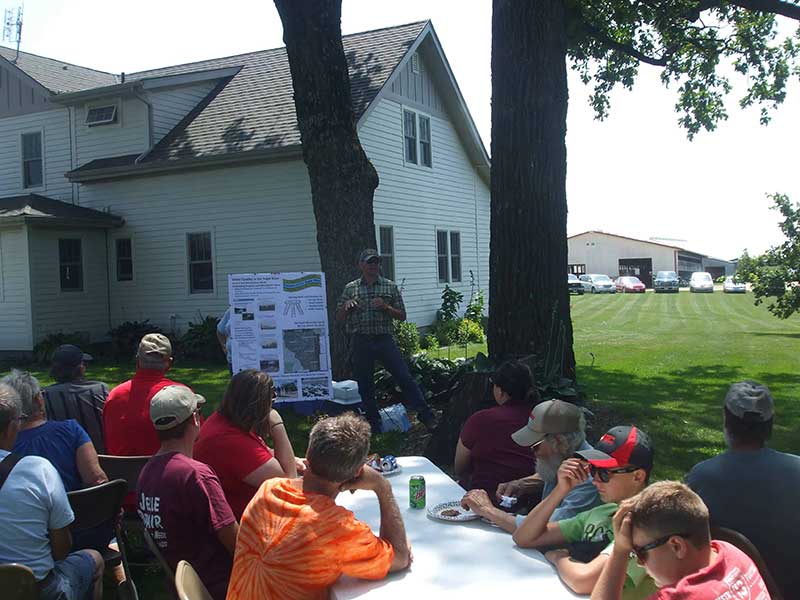 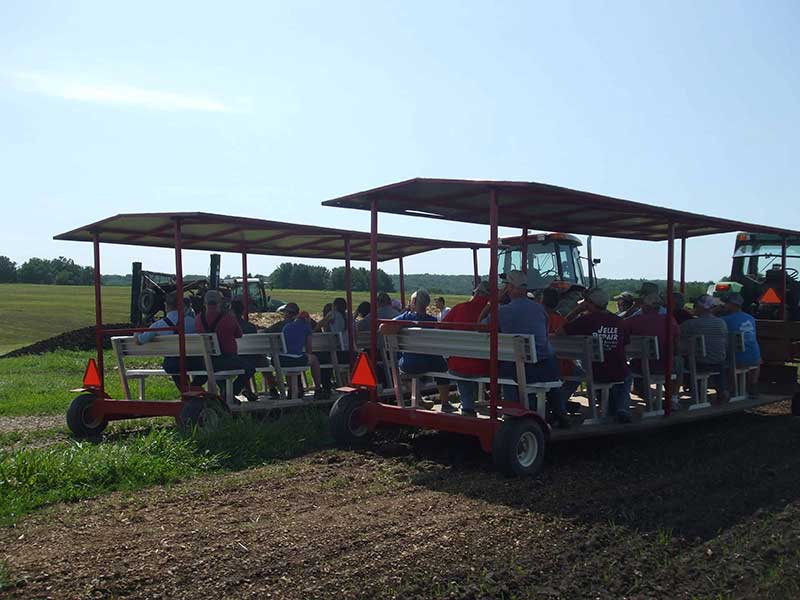 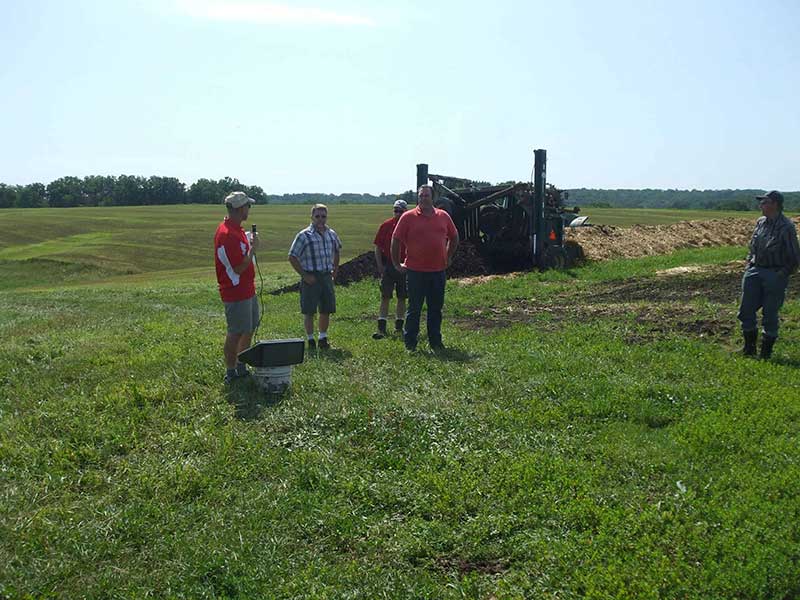 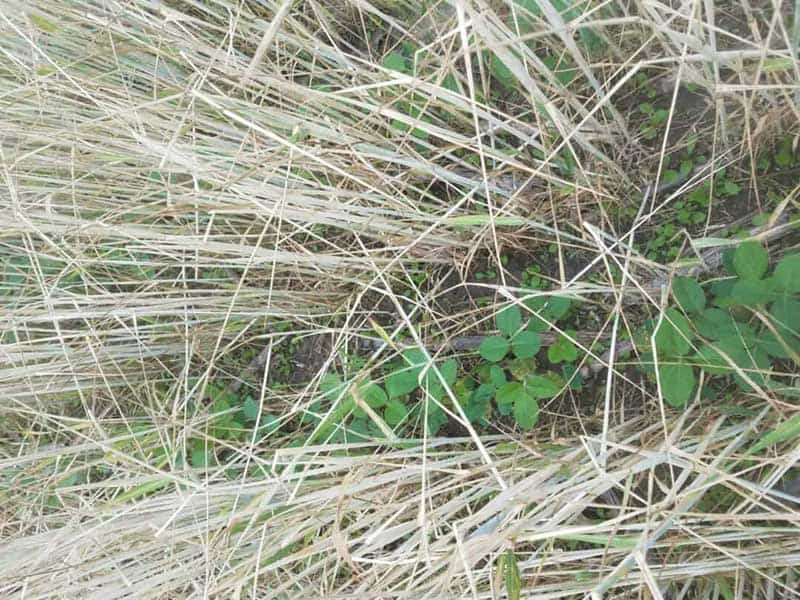 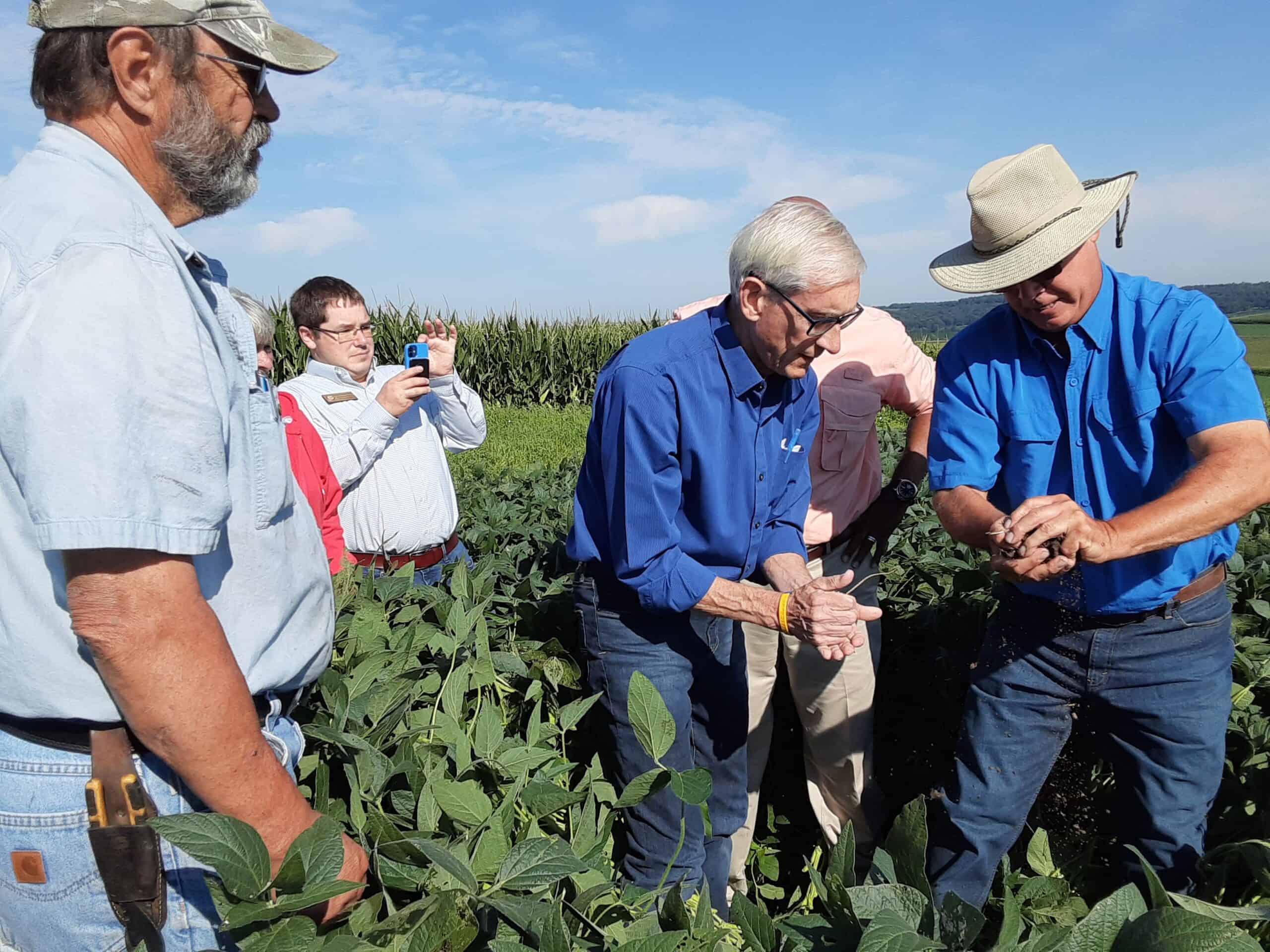 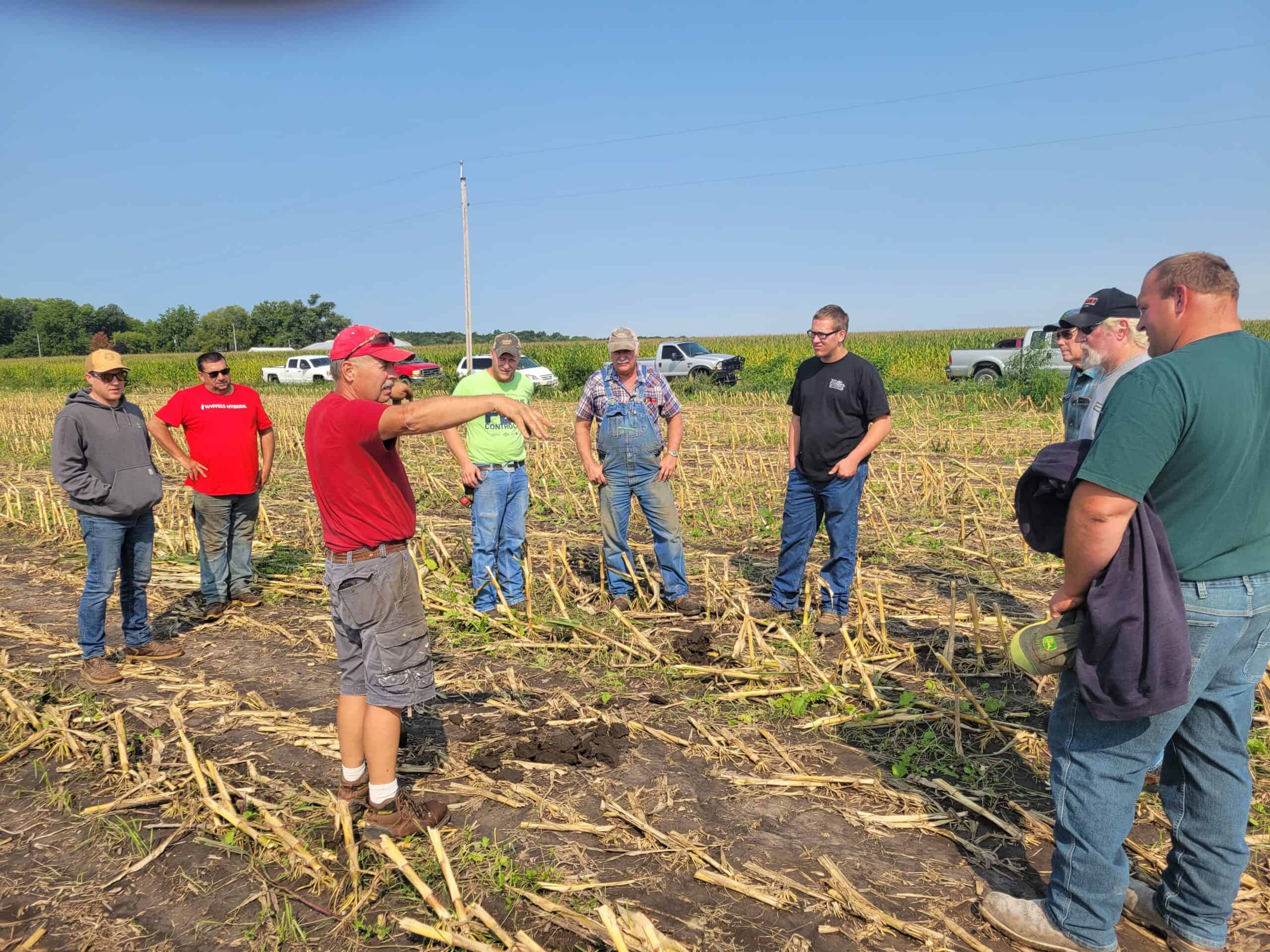 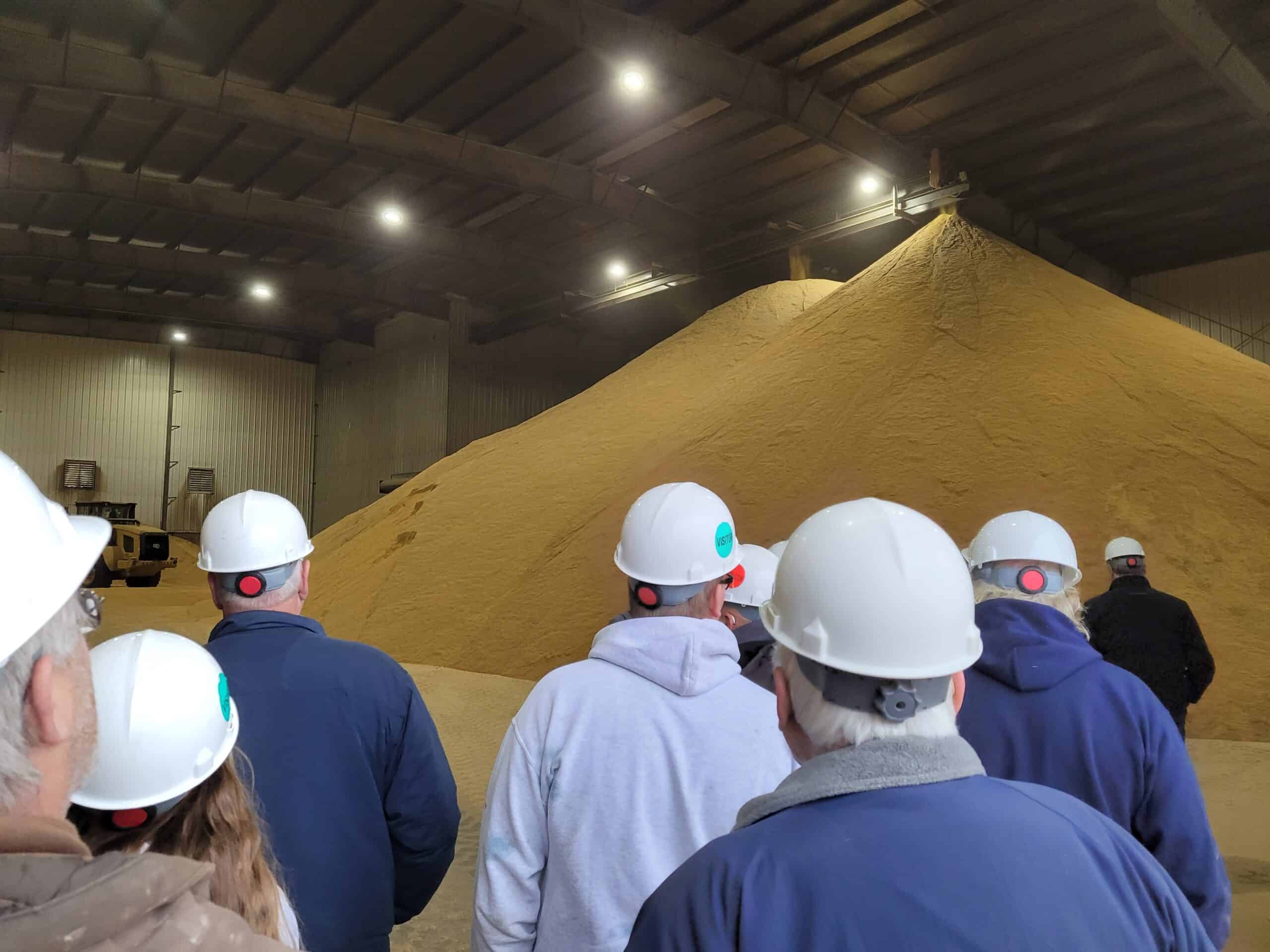 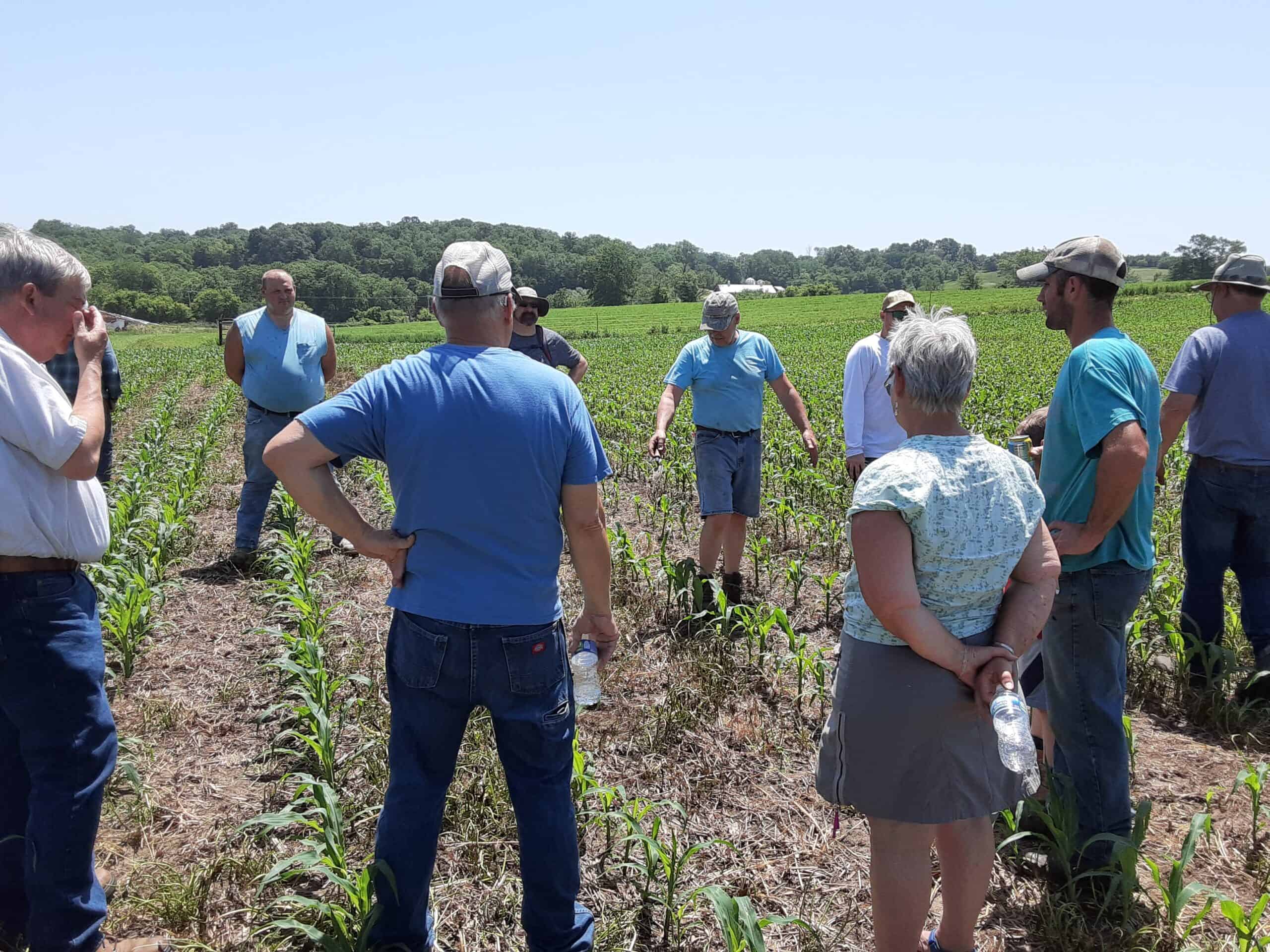 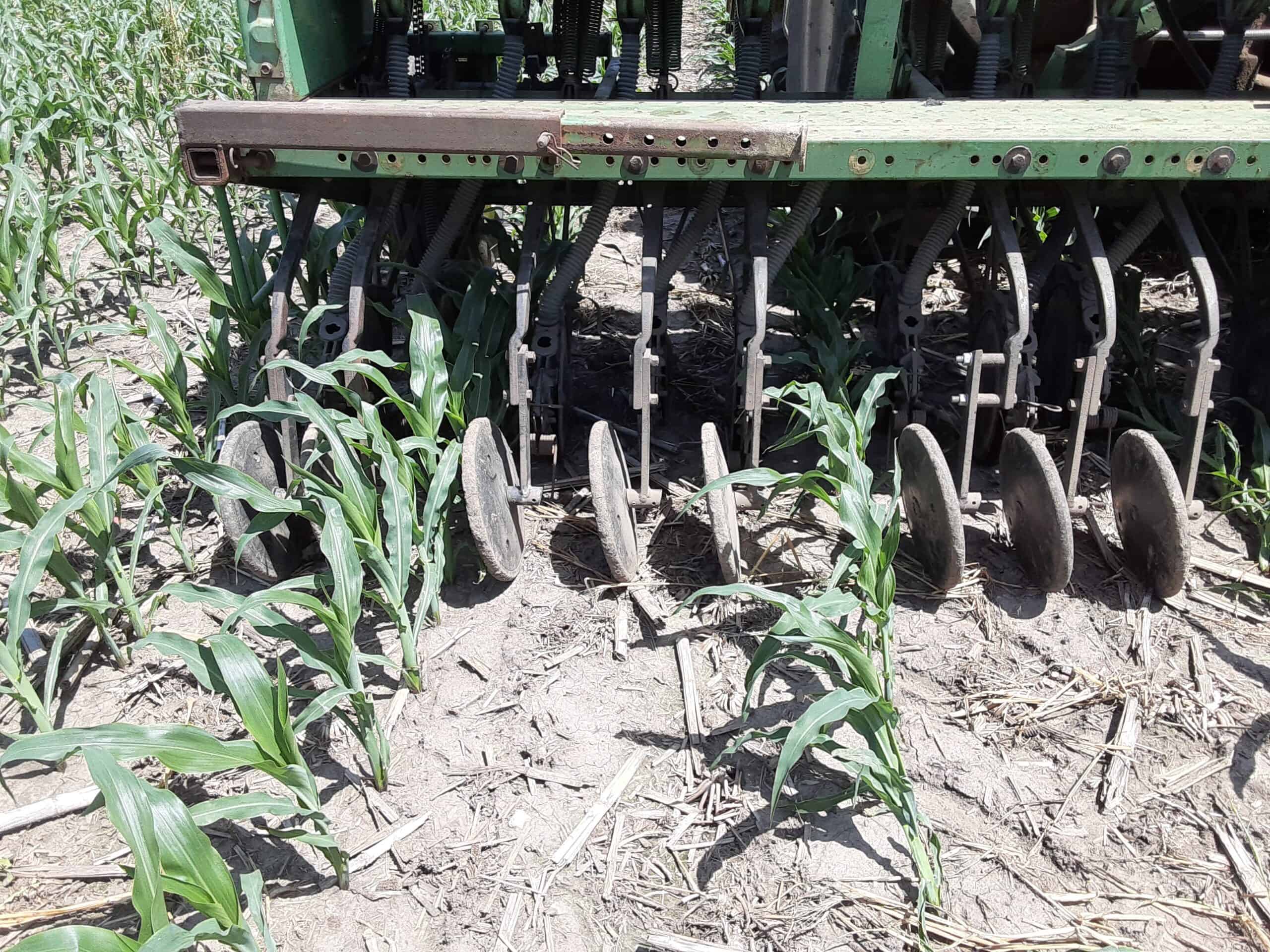 At your own pace NM training 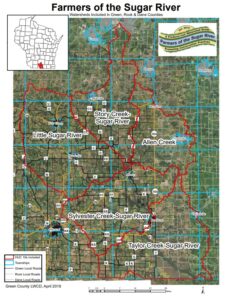 Map of Farmers of the Sugar River Area 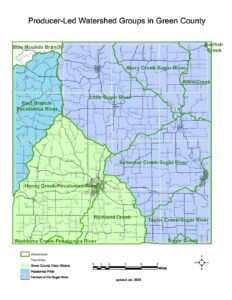 LSRWA Taking the Pulse of a Watershed

Save Money, Time & Soil The Economic$ of No-Till

Cover Crops in the Driftless

Biological Capital from One Good Idea

Russell Hendrick- Treating the Farm as an Ecosystem

Dr. Lowell Catlett- Best Time Ever to Be in Agriculture

Is your soil showing symptoms of being sick?